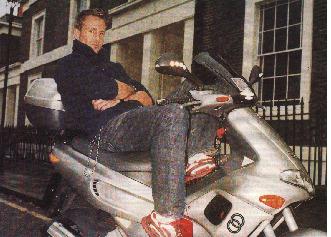 MY KIND OF DAY
There's an assumption that dancers don't have brains, so becomming an actor after spending most of my life as a ballet dancer was never going to be an easy transition. I went to the Royal Ballet School at the age of ten, appeared in Rudolf Nureyev's Nutcracker a year later and danced with the company [he danced with ballerinas such as Sylvie Guillem and Darcey Bussell] until i was 27. But it's a weird, institutionalised and insular world, so when i broke my big toe, ripped a tendon and was forced to give up seven years ago i was rather pleased to get out. I went straight into TV commercials and that's really where i've learnt my craft. People still remember me from Natalie Imbruglia's Torn video, and on TV i played Lancelot in Merlin and appeared in The Governor with Janet McTeer, but Holby City is the biggest acting job i've had.

I'm already getting quite a few fan letters, (does that mean me Jeremy? - Carol?!! hehe) which is very nice and complimentary, and like my character [cardio-thoracic surgical registrar Alex Adams] a lot. He's some of the things i'd like to be - he's much more outspoken and confident than i am - but he's more emotionally shut off than me, slightly damaged goods. He finds it very difficult to commit to anyone, but i suppose i do, too. I'm single, unfortunately. But i'm a very social animal and if i have a weekend free i often go and visit friends in Amsterdam or Spain.

I've been all over the world working in the past three years and it's only in the past six months that i've settled in London. I rent a room in an actor friend's flat in a lovely Georgian square handy for King's Cross and the morning train to the studios at Elstree. I also have a thirties Art Deco apartment in Miami, which i bought at the beginning of the year. I thought it was about time i had a place of my own, but i didn't want to buy into the inflated London market. Property in Miami is amazingly cheap. Because of Hloby City i hardly ever get there now, though i shall be going for Christmas.

I'm up at 6am because i have to be at Elstree by seven. I'm terrible in the mornings, but i always have a protein drink and an effervescent vitamin C tablet - i may not dance anymore but i need to be physically fit. Then i get on my Gilera Runner 180cc scooter, which is a sort of funky new-age Vespa, and zip off to the station. I've had motor scooters ever since my days at the Royal Opera House - it's the only way to beat the traffic. This one is really cool. It's supposed to go from 0-50mph faster than a Porsche, so when i shoot away from traffic lights you can see people's jaws drop.

I go through my lines on the train, mumble them while i walk to the studio and then get caught up in a day's filming that often doesn't finish until 7pm.

I was rather anxious about committing to one project for so long - i finish in March but the BBC has an option for another two years - but i'm really enjoying it. I have lunch at the BBC canteen and in the evening i eat out or with friends - i'm a terrible cook. I don't drink a lot - i don't much like the taste of alcohol and never have it in the house.

In my spare time i'm very interested in wildlife. I used to be a great birdwatcher and i'm obsessed by animal behaviour so my great ambition is to make a nature programme. I'm a scuba diver, so maybe i could do a film of fish. I've had tropical fish - particularly cichlids from the African Rift Valley - from the age of eight until a couple of years ago and i really do miss them.

Special thanks to Laura for letting me know about this interview