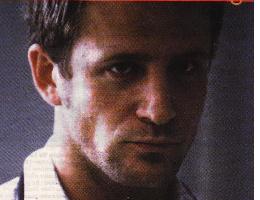 Weren't you in the Royal Ballet?
For nine years. I didn't like the institutionalised, repetitive part of it. Its supposed to be artistic but its more of an army regiment. So, I auditioned for the role in Holby City, but when they offered it to me I took a long time to decide to take it. I didn't want to be stuck in a contract and then find I wasn't enjoying myself. I was also slightly wary this would be the same as the ballet. It actually turned out to be ten times better.
What do you think of being The New George Clooney?
Well, I've been mentioning that to every journalist I can find because by association its not a bad thing. [Laughs]. I was a bit wary of people's assumptions of what I'm about. There is pressure involved in being a supposed heart-throb.
Surely not!
Well, I've got a bit of a chip on my shoulder about being taken seriously, that was the other reason I hesitated about taking the part.
But playing a heart surgeon, surely you'll be taken seriously?
I hope so, but I don't really know the show that well. The first two episodes were really good, but I wasn't very impressed with one I saw from the last series.
Are you at all similar to your character, Alex?
The character breakdown said semi-grunge, which I am anyway, so thats very easy and comfortable. He is more sure of himself than I am, more prepared to take risks. He speaks his mind more, whereas I am quite polite.
Whos is your favourite pretty young thing in Holby City?
I couldnt say that! Actually, it wouldnt be a pretty young thing, it would be George Irving, who is nothing like his character. Its extraordinary, he plays this hard, cold man and he's the most warm, generous and lovely person.
How did you come to be in Nathalie Imbruglia's Torn video?
Id never done a music video before. My agent told me about her being a former Neighbours actress and I said No thank you, I dont want to be in a Kylie Minogue II video, but then I met the director and Nathalie and liked them a lot. I thought, Probably nothing will come of this, and then it was played constantly on MTV. I liked what I did in it, which is rare for me.
Have you stayed in touch with Nathalie?
Only through mutual friends, we are constantly sending messages but I havent seen her since. We got on very well.
Did you fancy her?
No, not really.
Do you ever socialise with celebrity friends?
I dont have any celeb friends.
Do you want some?
I am sure they are nice people, but not really. Someone will kill me if you quote me on this, but my agent told me I had been invited to the Peoples Awards and when I found out the cast from Easternders were going, I said I'll pass. Which is really snobbish of me, but I just thought, Holbys mainstream enough. I dont need to be doing every launch.